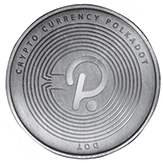 Polkadot is a software that seeks to incentivize a global network of computers to operate a blockchain on top of which users can launch and operate their own blockchains; blockchains operate separately and in silos. Polkadot promises to create an internet of interoperable blockchains for a decentralized web. As a matter of fact, besides sending DOT tokens across blockchains, Polkadot also allows them to communicate and exchange actual data. The project’s mission is to allow any type of data to be transferred between any blockchain network securely. For example, allowing private networks such as a university to confirm the validity of a person’s diploma that’s stored on a public network.

In this way, Polkadot is one of number of competing blockchains aiming to grow an ecosystem of cryptocurrencies, other notable examples of which include Ethereum (ETH), Cosmos (ATOM) and EOSIO (EOS).

With Polkadot, new parachains can provide better solutions to users and developers—which is why winning a parachain slot auction is important for many projects.

How does Polkadot work?

The Polkadot network allows for the creation of three types of blockchains:

To keep its network in agreement about the state of the system, the Polkadot Relay Chain uses a variation on proof-of-stake (PoS) consensus called nominated-proof-of-stake (NPoS). the primary goal of which is to ensure that the majority of the stake can always control the network. The proof of stake used by Polkadot is a nominated proof of stake (the NPoS system), where nominators back validators with their stake as a sign of trust in their good behaviour. If nominators choose a bad validator, they are subject to loss of stake, the main difference with the more generic delegated proof-of-stake (DPoS) system used in EOS, for example.

Several on-chain voting mechanisms must agree on changes to the protocol, such as referenda with flexible super-majority thresholds and batch approval voting.
Polkadot’s multi-layered governance model allows the implementation of protocol updates without resorting to hard forks. This system allows anyone who stakes DOT by locking the cryptocurrency in a special contract to perform one or more of the following roles necessary to its operation:

Users who stake DOT and perform these roles are also eligible to receive DOT rewards.

Governance in a blockchain is how transaction and block verification rules are decided upon, implemented, and enforced. It can be intended as the integration of the norms and the code, the people and the institutions that facilitate the existence of a given organization.

“Polkadot’s parachains allow multiple transactions to run at the
same time, rather than being capped at a single transaction.

Three types of Polkadot users can influence the software’s development. These include:

DOT is the internal token of the Polkadot network. This token allows holders to vote on potential code changes, which then automatically upgrade across the network if a consensus is reached. The DOT token is what powers the network, being Polkadot’s native coin. It is used for payment of network fees, for governance voting and validating rights, for interoperability. When messaging or exchanging data between two blockchains in the network, DOTs are used to pay for transaction fees. Voting on protocol updates or fixes also occurs by payments of DOTs.

Nominators also bond their DOTs to a dedicated validator they are backing. Bonding tokens help to increase the network’s attack cost and allow DOT holders to earn newly minted tokens as staking rewards.

There are three main uses for the DOT token apart from basic financial transactions: governance, staking, and bonding. Parachains are an integral component of the Polkadot network as explained above. On October 13th, 2021, the team announced that they are ready to deploy parachains on the mainnet. This was a landmark achievement and a massive milestone from Polkadot’s roadmap as parachains were in the works for years.

The first-ever winner to successfully secure a parachain slot was the Acala protocol. In a head-to-head race with another popular Polkadot ecosystem player – Moonbeam – Acala managed to win the first parachain auction that ended in November 2021. The way parachains are secured is through the so-called parachain auction. Essentially, projects need to bid DOT tokens against each other, and the winner of the auction wins the slot. However, these can be quite pricey, and not every team has the resources to afford it. That’s where an interesting mechanism called crowdloans comes into place.

Essentially, every DOT holder that supports a certain project can lock their DOT in exchange for a reward from the project team – generally paid in the form of interest in the project’s native tokens. This has become the go-to way for teams to secure enough funds to bid parachain slots. There are many exchanges that also support Polkadot crowd loans and one of them is Binance. Crowdloans are a way that you can directly support your favorite projects like Efinity, for example. By participating in a crowd loan, you can bond your DOT to the Polkadot network to vote and increase your favorite project’s chances of winning. If the project wins, then the tokens will be locked, and you’ll get them back after 96 weeks, when the parachain’s lease expires.

You and other community members lock your DOT tokens by contributing to your favorite project(s). These tokens are kept in a specific module on the relay chain, safe and secure. Once the parachain auction begins, the Crowd loan module will then bid on behalf of the project you supported. This process will continue until the auction is finished and a parachain slot is won.

Parachain slots that are won will begin connecting to the network in December in batches of five. If the project you supported wasn’t successful, any tokens that were locked will then be returned to you. If the network you backed was successful, however, your tokens will stay locked on the relay chain until the lease ends. While your tokens do get locked up for an extended period of time, successful networks will reward you for your support in the form of project tokens such as EFI, or even exclusive NFTs.

From what we understand, DOT tokens are not be used by a Parachain team to finance project development. Rather, they are used for leasing the Parachain slot and enabling the project to operate in Polkadot Network. Furthermore, smart contract technology guarantees the redistribution of DOT tokens at the end of the lease period.

There are concerns around the Shariah compliance of crowd loans and the rewards DOT contributors receive. There is real potential of the DOT token being used as a Qard by funding the lease of the Parachain slot on behalf of another project team, and then being reward for the funding of the lease space. If it does classify as a Qard, then any benefit received by DOT contributors will be Riba and not permitted.

Polkadot has a genuine utility of supporting web3 architecture and to allow any type of data to be transferred between any blockchain network. DOT has several use cases, of which are clearly permitted such as governance, paying for transaction fees and validation. Some use cases and operations such as crowd loans have a high Shariah non-compliance risk and should be avoided.

Given that Polkadot’s core functionality and purpose is that which is Shariah compliant, there are multiple use cases of DOT, which are deemed permissible. However, this must be reviewed periodically as there is a possibility that the token is eventually only used in unlawful activity.