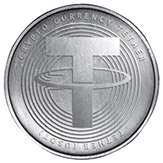 Launched in 2014, Tether is a blockchain-enabled platform designed to facilitate the use of fiat currencies in a digital manner. Tether works to disrupt the conventional financial system via a more modern approach to money. Tether has made headway by giving customers the ability to transact with traditional currencies across the blockchain, without the inherent volatility and complexity typically associated with a digital currency. As the first blockchain-enabled platform to facilitate the digital use of traditional currencies (a familiar, stable accounting unit), Tether has democratised cross-border transactions across the blockchain.

Tether tokens exist as digital tokens built on bitcoin (Omni and Liquid Protocol), Ethereum, EOS, Tron, Algorand, SLP and OMG blockchains. These transport protocols consist of open source software that interface with blockchains to allow for the issuance and redemption of cryptocurrency tokens

How does Tether Work? The Tether Platform is fully reserved when the sum of all Tether tokens in circulation is less than or equal to the value of our reserves. Through our Transparency page, anyone can view both of these numbers on a daily basis.

Tether tokens are new assets that move across the blockchain just as easily as other digital currencies. Tether currencies are not money, but are digital tokens formatted to work on blockchains. Tether tokens hold their value at 1:1 to the underlying assets.

Tether was originally created to use the Bitcoin network as its transport protocol—specifically, the Omni Layer—to allow transactions of tokenised traditional currency. Since this original version of Tether uses the Bitcoin blockchain it inherits the inherent stability and security of the longest established blockchain network.

“Tether is a blockchain-enabled platform designed to facilitate the
use of fiat currencies in a digital manner.”

Tether on the Ethereum blockchain, as an ERC20 token, is a newer transport layer, which now makes tether available in Ethereum smart contracts or decentralized applications on Ethereum. As a standard ERC20 token it can also be sent to any Ethereum address.

What real-world currencies does Tether support?

Who can use Tether?

Tether enables businesses – including exchanges, wallets, payment processors, financial services and ATMs – to easily use fiat currencies on blockchains. Some of the largest businesses in the digital currency ecosystem have integrated tether.
Individuals can also use tether-enabled platforms to transact with Tether tokens.

Although Tether initially claimed that each Tether was backed by a US Dollar at a 1:1 ratio, in March 31 2021, Tether released the following: 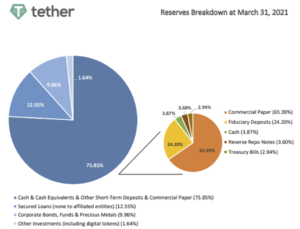 Tether claims in the whitepaper the following:

“We could go bankrupt ¬ In this case, the business entity Tether Limited would go bankrupt but client funds would be safe, and subsequently, all tethers will remain redeemable. Tethers may be redeemable/exchangeable for the underlying fiat currency pursuant to Tether Limited’s terms of service or, if the holder prefers, the equivalent spot value in Bitcoin. Once a tether has been issued, it can be transferred, stored, spent, etc just like bitcoins or any other cryptocurrency. Hence, the redeemability of a token is not contractually guaranteed.”

Although the utility of Tether itself is to function as a payment token and therefore permissible, there are concerns on the company. There should be some caution and review on the developments of Tether and the company itself.

What are Tether Tokens?